In the last year, Ramon Wence-Valladolid was arrested for drunken driving, charged with having a blood alcohol content exceeding 0.20 — the legal limit is 0.08 — and sentenced to 10 days in jail and three years of probation.

He also became part of a statewide trend.

As a first-time, misdemeanor DUI offender, Wence-Valladolid was ordered to pay $2,000 in fines and fees — a tab the father of three said he couldn’t afford as an out-of-work cook with a wife and young children to support.

“It’s more difficult” for low-income or unemployed people, Wence-Valladolid said through a translator. “Instead of helping themselves out, they get deeper into these kinds of problems.”

In one of the first tests of a January appeals court ruling, a Contra Costa County judge effectively waived Wence-Valladolid’s bill this month. Unless prosecutors can prove he has the ability to pay, he’ll owe nothing. 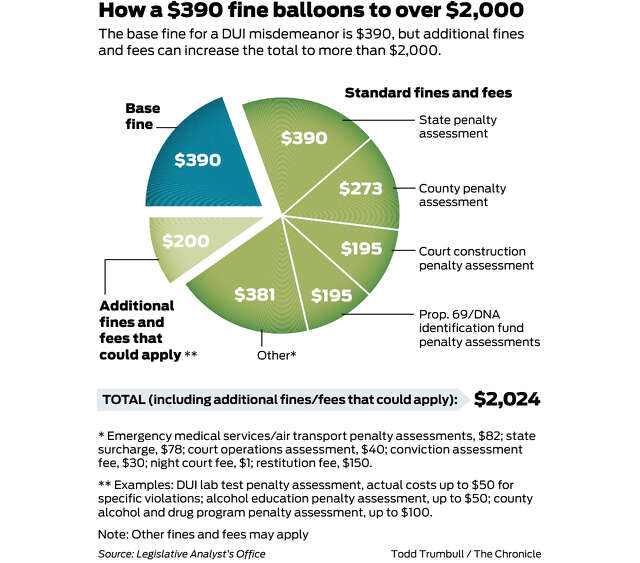 The ruling by the Second District Court of Appeal in Los Angeles, in a case called People vs. Dueñas, is rippling through the state. Defense attorneys are holding up the case in arguments for their low-income clients, while lawmakers are looking to enshrine its legal underpinning — that imposing fines without considering defendants’ ability to pay tends to punish them for being poor — into state law.

“Dueñas has changed the landscape in a number of ways,” said Brandon Greene, an attorney who worked with the East Bay Community Law Center on the case. “I think California is on track to recognize that the way that we fund certain services — whether it’s at the state or county level — is on the cusp of re-envisioning.”

The appellate case involves Velia Dueñas, a homeless Bakersfield mother who pleaded no contest in 2015 to driving with a suspended license. Dueñas was placed on probation and ordered to pay $220 in fees and fines, which her attorneys appealed.

The Second District court sent the fee order back to the lower court, saying prosecutors bear the burden of proving Dueñas could pay. Across the state, defense attorneys saw a game changer.

San Francisco public defenders have started filing Dueñas-based motions for DUI clients “whenever it looks like they’re not able to pay,” said Oliver Kroll, a deputy public defender who represents misdemeanor clients. A judge ruled against one of these cases so far, and attorneys are appealing, he said.

Attorneys for a Los Angeles County defendant convicted of a drug offense won an appeal to have his fines remanded to the trial court, which was ordered to hold a hearing on his ability to pay.

Brandon Banks, Wence-Valladolid’s public defender, said his office is taking a “very aggressive approach” to applying the Dueñas case, which will be tested this week in another case out of Pittsburg.

In an interview, Dueñas, 28, said her driver’s license was initially suspended because of unpaid fees from traffic tickets she had received as a teenager. After the court imposed the $220 license suspension fees, all she could think was, “I can’t pay them.”

Dueñas’ public defender, Alisa Hartz, offered to help her fight the court costs. She never expected her “tiny” case could have such an impact.

“To me, it cracked the door open, and now someone else is going to throw it wide open,” Dueñas said.

The ruling comes amid a statewide movement to reduce or eliminate traffic and criminal court fees for the poor, who are disproportionately represented in the criminal justice system.

Last year, San Francisco and Alameda counties became the first in the nation to scrap certain administrative fines and fees for all criminal defendants, regardless of income. Several other counties are considering similar steps.

A newly proposed bill seeks to spread the changes across California, erasing administrative fees for programs like diversion and probation. If SB144 passes, the law would be the first of its kind in the nation.

State Sens. Holly Mitchell, D-Los Angeles, Sen. Bob Hertzberg, D-Van Nuys, co-authors of the bill, describe the status quo as high-pain, low-gain. Governments recoup a fraction of the targeted court costs, because many fees are imposed on people who can’t pay them.

Both San Francisco and Alameda counties, as well as SB144, leave in place other criminal fines and fees, which are earmarked for the state’s general fund, DNA testing, victim restitution and dozens of other programs.

Dueñas-based arguments that have seen success apply to the entire tab of court costs, but only for individuals who can’t pay.

In Wence-Valladolid’s case, the Contra Costa County district attorney’s office argued that the Dueñas case was not meant to be applied to the masses. The office said the burden of proving a defendant’s ability to pay should not be placed on the state, which has no way of accessing a defendant’s financial records.

A spokesman said the office is reviewing its next steps.

Widespread elimination of fines and fees affects numerous government budgets. Some fees, for instance, support the state’s DNA Laboratory, courthouse construction and police training. A report from the California Legislative Analyst’s Office found that many of these programs have seen declines in revenue over the past several years.

Various factors explain the decline, including efforts to ease the financial toll of the criminal justice system, said Anita Lee, a principal fiscal and policy analyst who authored the report. Also, a new law prevents the state from suspending people’s driver’s licenses for the inability to pay fines, giving collection agencies one fewer tool.

“I think that there is broad concern that fines and fees are too high,” Lee said, adding that, regardless of the cuts, the programs still expect funding from the Legislature.

Greene, of the East Bay Community Law Center, said the fallout from the Dueñas case could have dual impacts: giving more weight to defendants’ ability to pay and spurring a reassessment of how government is funded.

“Funding things on the backs of poor people,” he said, “is neither just nor sustainable.”